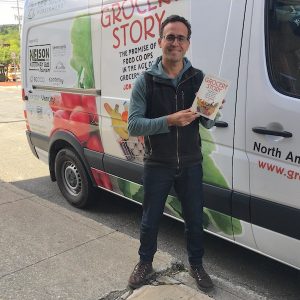 Back in May, our food co-op hosted author Jon Steinman who was on the first leg of a very long tour promoting his book Grocery Story: The Promise of Food Co-ops in the Age of Grocery Giants (New Society Publishers). That’s Jon and the GroceryStoryMobile outside our store.

I’ve been meaning to write an online review or two of the book and have finally gotten around to it, due to who knows what combination of a bit of unscheduled time and some avoidance of other tasks. Here’s what I just posted on Amazon (speaking of grocery giants):

Jon Steinman asks why efforts to fix the problems in our food system have so often focused on the small “alternatives” to mainstream food retail—farmers markets, CSAs, etc—rather than on the mainstream itself, since that’s where most people get most or all of their food? Anchored his own experience on the board of Canada’s largest food co-op grocery store and a strong storytelling sensibility honed in decades as a media producer and host, Steinman’s book is a useful overview and roadmap for how we might expand the space for alternatives within the world of the grocery store itself.

Most of us have no idea how the “grocery giants”—huge supermarket chains that now dominate most market areas—became so powerful in the 20th century. Grocery Story gives a very solid and needed overview of that history. It was good to be reminded that the in the early days, many people—including lawmakers—recognized how fundamentally anti-competitive the growing monopoly power and vertical integration of the grocery corporations were becoming. “Compared to the chain store uprisings of the 1920s and ’30s, North American eaters and regulators have been asleep at the plate” in more recent decades, Steinman writes (41).

The book is a call to more active engagement with grocery store issues in the present, not simply through critiquing what we don’t like but by actually creating the kind of food retail that can work well for more people all along the food chain. Steinman does acknowledge the enormous challenges of doing this, especially in a time when nearly every grocery giant is trying to get into the organic and natural food niches that used to give food co-ops their tiny market advantage. But a strength of the book is the richness of examples Steinman draws on from creative, adaptive, and determined people in food co-ops around the US and Canada who are actively building that alternative world.

There are practical suggestions here as well as big-picture clarity. A researcher might wish for more meticulous citation (page numbers aren’t included for quotes from other books and articles) and a co-op manager might find it helpful to have a slightly more detailed analysis of some of the failures as well as the successes in the co-op world. But as someone working on trying to keep a small co-op going in a low-income rural area, I came away from the book feeling inspired and enlightened. It’s a very useful resource for anyone who wants to understand the realities of food retail and food system reform.

Posted In: Accidentally I'm a grocer