Of course it’s impossible to predict how any historic site might be used in the future. The people shaping commemoration at Civil War battlefields a hundred years ago would be astonished by the degree to which race has been brought back into the meaning-making that goes on here. The program for this conference points toward some emergent interpretations that may become much more salient as the century goes on – for example, we may find ourselves looking back at the Civil War very largely as an early example of industrialized warfare, picking up themes that were certainly seen as important at the time but that are taking on new significance as we deal with global environmental catastrophes stemming largely from industrialization.

But I’d like to think we might also finally come to grips with issues of gender at these sites. When we talk about gender at historic sites now, it’s still almost always in terms of adding women to the picture. Masculinity is invisible, in exactly the same way that whiteness was for too long. These are dominant, unmarked categories; they’re the things that are hard to talk about because by definition, people who inhabit them tend to have difficulty seeing how their own privilege is constructed through them.

Thanks to a solid body of scholarship and a good deal of political will inside and outside the National Park Service, we’ve come to recognize how the bipartisan celebration of the white Civil War soldier gradually pushed difficult conversations about race out of official memory. Can we envision going a step farther and foregrounding the role that historical constructions of American masculinity played in the Civil War and in how it has been remembered? That’s the live nerve that connects to the contemporary military juggernaut and the wars and school shootings and other smaller-scale kinds of violence that rest on those complicated linkages among masculinity, weapons, and power. Bringing gender into Civil War interpretation in a really serious way could make these battle sites a place to question and consider the powerful impulses that have historically led Americans to fight.

The scholarship is already there to support this approach, but it hasn’t found its way into interpretation on the ground yet. And it seems to me that it will only work if we can find a way to do it that doesn’t just follow the set patterns of argumentation and defense – in a sense, a much more feminist than masculinist approach.

We would need to bear in mind that strange continuum that connects play and war, and also those conflicting truths about war: that it’s both compelling and repulsive, in ways that Americans, in particular, have had trouble coming to terms with. We need a model that would accept the inevitable confrontations but refuse the conflict, that would move beyond wanting to be in the right, and look for the counter-intuitive practices that create openings for change on a more profound level.

In this sense, “Holding the High Ground” is not the model to follow. I am in no way trying to sell that initiative short: it was remarkable, it took real courage, and it was badly needed. But it also embraced and continued the argumentative pattern rather than refusing it. It was combative; it was masculine; its metaphors and methods were essentially martial. It was a well-planned campaign in which the big guns of current scholarship were brought up in support of a clear tactical objective. It was a successful move in a long-running game, but not a game-changer.

Unlike some of my fellow peace vigilers, I do hold open the possibility that fighting may very occasionally be the best of a bad set of choices, and given the fundamental contradiction of a system of racialized slavery within a single democratic nation, I’m willing to entertain the possibility that the Civil War may have been one of those times. In the realm of symbolic conflict, I think “Holding the High Ground” may have been another. But after a certain point, conflict tends to breed more conflict, and “Holding the High Ground” didn’t really challenge that pattern. I would love to see it as a late skirmish in a long war rather than as a model for future engagements.

So what might that model actually look like on the ground? The Park Service points us part of the way with its policy banning actual battle reenactments at national parks. But a ban is a very indirect kind of statement, and it tends to produce somewhat strange commemorations that can’t function as “collected memories” because no one’s understanding of the past has really been articulated or brought into relation. We’ve probably all seen these events, where reenactors mysteriously elevate their weapons to fire into the trees while the spectators scratch their heads and the Park Service’s very good reasons for prohibiting simulations of battle become more of a bureaucratic footnote than a compelling counter-statement. These events are semivocal or quasivocal rather than polyvocal. 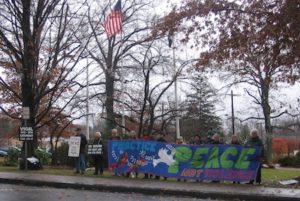 Real polyvocality, to me, would look more like a book launch I attended several years ago for a volume of essays on the legacy of the 54th Massachusetts Regiment. The event was at the Old South Meeting House in Boston, a resonant space of civic debate since before the American Revolution. A group of reenactors performed a scene that focused on the material culture of camp life and valorized the common soldier’s experience. David Blight made a trenchant statement about how the memory of the Civil War had been hijacked by the reimposition of white rule. A children’s gospel choir sang “Jesus on the Mainline.” It was patriotic, critical, amateur, scholarly, heartfelt, a bit messy, and entirely inspiring. Parts of it contradicted other parts and no one attempted to impose unity on it.

That was the image I had in mind on vigil days when counter-protestors stood in the park in Orange at the same time as the Women in Black, with patrons of the bar across the street contributing their thoughts and people in passing cars displaying every imaginable combination of digits. That gave me a sense of what it’s like to stand steadfastly in a resonant space without in the least backing away from my sense of what was right but without negating or even mentally arguing with anyone else’s very different statement. That was what let me finally bring myself into relation to all the things about American military culture that had been so troubling to me.

So the task of making Civil War battlefields truly usable in a time of war seems to me to be threefold.

First, we need to recognize that gender has been as much of a blind spot at these sites as race was for so long. We need to find ways of talking about masculinity that actively engage and challenge – but refuse to fight with – the logic that equates weapons with strength and violence with power – the kind that has historically made it far too easy to stir up enthusiasm for fighting. And we need to learn to tolerate events and expressions that enable competing understandings of war to occupy the same spaces, without trying to resolve the contradictions.

It won’t be as neat or conclusive as many of us might like, but if we can do it, it may create some shared ground – common ground, not high ground – to probe another tender spot in the American psyche, one that is central to all conversations about the meanings and the memory of the nation at war.